Samantha and Chloé take a stroll through Saint-Tropez to place des Lices, exuding style and glamour as they soak up the sights and sounds and relax on sunloungers. They really are seizing the day!

You may have already seen that famous scene in the film “And God…created woman” where Brigitte Bardot asks Curt Jürgens: “Do you know a country where people think only about dancing and laughing?” From the French Riviera, we can assure you that after the report we’ve just made, we have the answer. Sunshine and the good life are on the horizon with our #FermobPeople: St Tropez has put on her diva look and for two days, Samantha and Chloe are feeling good in the heart of the sexy city.

Azure blue sea, sexy Frenchies and little bikinis are all ready and waiting! As for us, under the Mediterranean sun we’re already as happy as fish in water and we’re enjoying the view! The breath of the sixties is still blowing in St Tropez, and while you can still meet the stars of the postwar years on the Place des Lices or around the Old Port, you can also bump into #FermobPeople. Caught in the act of getting the most out of the here-and-now, Samantha and Chloe strike a pose, enjoying their girlie time together in this mythical town and letting themselves be at least as captivated as we are by this ultimately glamorous city! Relaxation captured on film through the lens of Tom Watson: what more can you ask of St Tropez?!

Did you say “St Tropez”?

When you think about St Tropez, you can’t help thinking jet setters on Pampelonne beach, trendy aperitifs, sails, yachts and (good) company. While out walking with Samantha and Chloe, we thought about this oh so legendary town, which has seen so many actresses, artists and celebrities within its walls. A wind of joie de vivre, a perfume of daring and fantasy: From Brigitte Bardot to Johnny Halliday, via Françoise Sagan, Claude François, Eddie Barclay, the dandy of St Tropez nights, Stéphane Collaro, Alain Delon and Mick Jagger, who even said “yes!” to Bianca in this heaven on earth … all of them left their home ports of Cannes, Monte Carlo or elsewhere, to fall under the spell of the St Tropez lifestyle each summer.

One of the #FermobPeople is born…

While in 1956, “God created woman” here in St Tropez, in 2019, it’s Samantha, our very own Brigitte Bardot who is starring on La Ponche beach, and entering the #FermobPeople legend! While shooting, we witnessed THE moment of grace in the middle of all this beauty. Hold on! Time stops. Before our very eyes, the frivolity of a time when La Madrague reflected authenticity and was a real haven of peace in the Baie des Canebiers. A simple time, with fishermen enjoying a quiet time, walks in the sun or through the small cobbled streets of the town centre. We’re definitely in paradise. Or at least we’ve just had an idea of what it’s like.

Somewhere between Eden and true happiness, the good life is waiting, and we caught a glimpse of it on that day, while Samantha and Chloe were wandering around St Tropez.

A natural feel that’s never over the top, and our two #FermobPeople are as fresh as the holidaymakers who were there.

Not just seashells and shellfish!

From the beach to the Café Sénéquier or the Café des Arts terraces, the narrow streets are brought to life by sailors’ red pompoms, games of petanque, and even Fermob furniture! And while this breath of freedom has been drifting round in the streets or beaches of St Tropez for 60 years, it has also blown its magic as far as Ramatuelle, where Samantha and Chloe are staying.

Perched in the heights, the house has a very sixties look, sitting between the hypnotic blues and the enthralling architecture of a style that is both assertive and committed. Lime-washed walls, soft lines, a sleek, sober setting, floors designed by a sixties designer … the property sets the tone, bathing our #FermobPeople in sensuality. Lunches in the sun, a few strokes in the pool: the two starlets are chilling out in a sublime setting. Only a panoramic view of the rest of the French Riviera is missing to make things utterly perfect … Ah, wait a minute! The breathtaking view is there too! And now, the moment is really perfect … 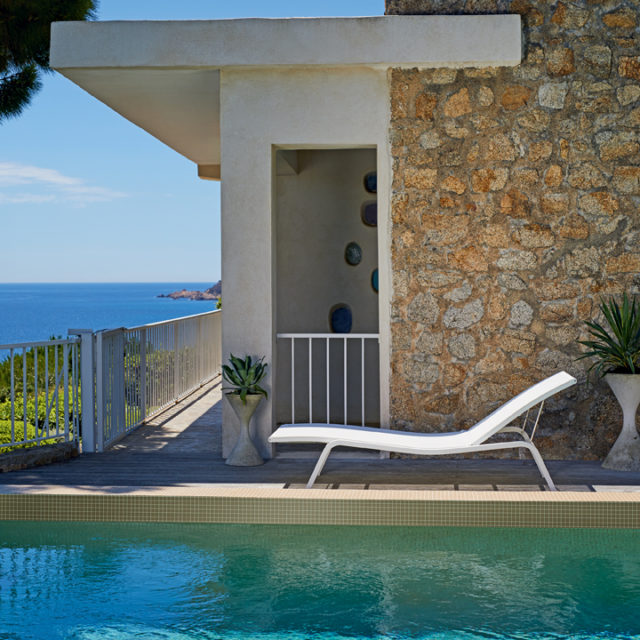 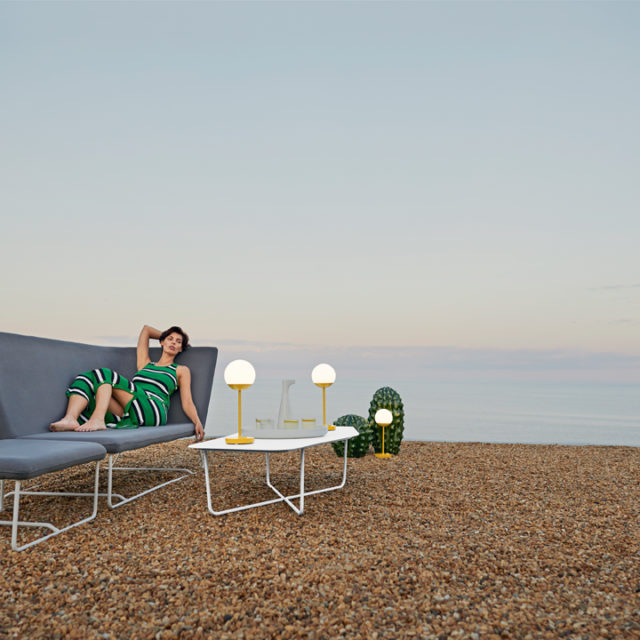 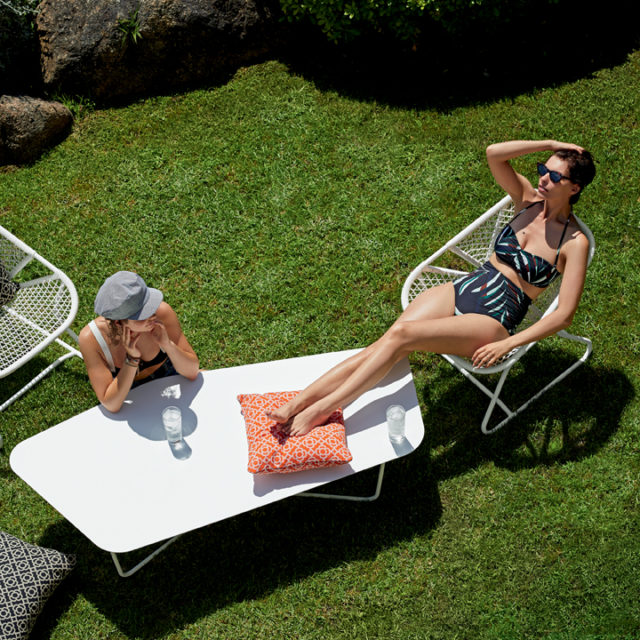 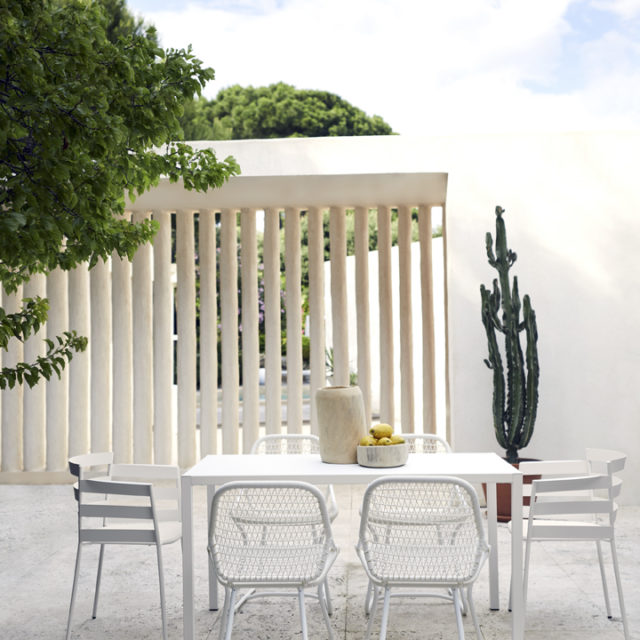 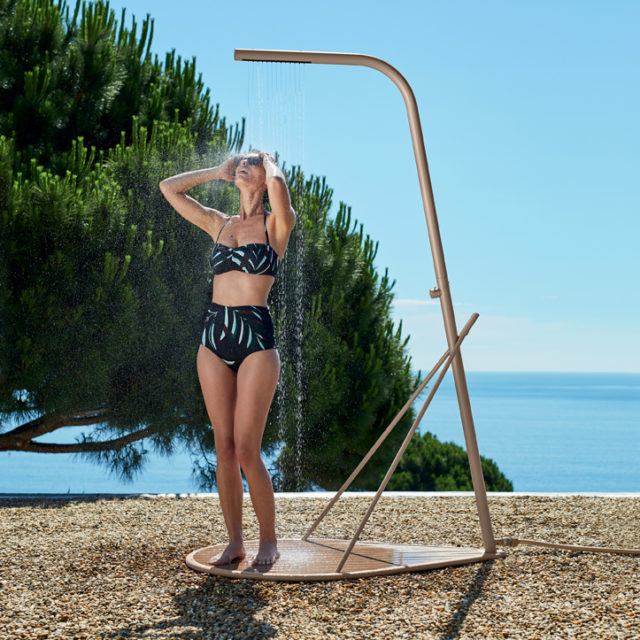 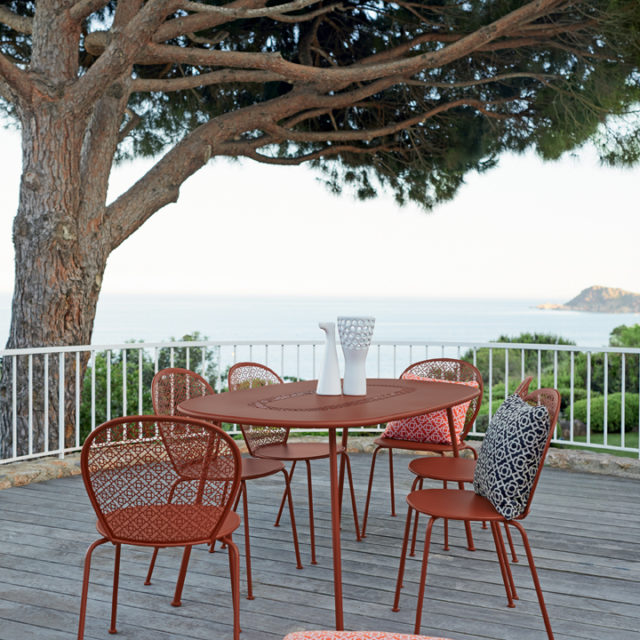 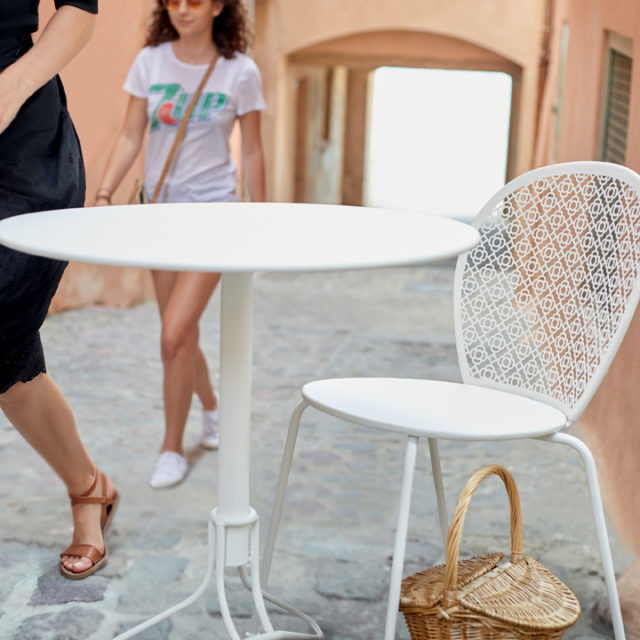 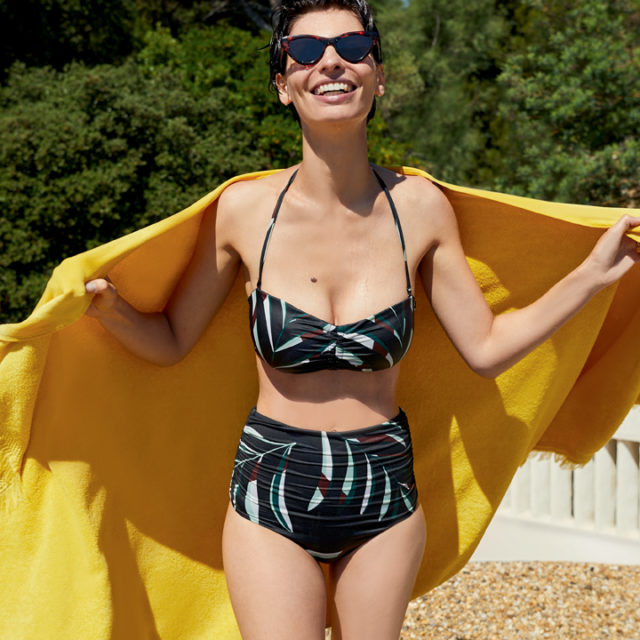